To achieve recognition of their quality, the 19 communes around Lake Grandlieu discussed the possibility of creating a regional appellation. The region has a special microclimate due to the lake’s 9000 hectares. It is said to be the biggest lake on the European plain. The national committee of experts appointed by INAO studied and analyzed the criteria defined by the growers and, in December 1994, approved the recognition of the new Côtes de Grandlieu appellation. Côtes de Grandlieu is differentiated by parcel delimitation and by adult vines more than 7 years old, which inevitably adds to quality. 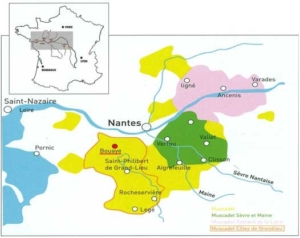 25 years later, the appellation enjoys a very positive image, as its Muscadet wines are often considered to be rich, fruity and elegant. .

Situated to the north of Lake Grandlieu, the commune of  Bouaye enjoys privileged exposure. Its south-facing slopes, covered with gravel, favour early maturity.

This website uses cookies so that we can provide you with the best user experience possible. Cookie information is stored in your browser and performs functions such as recognising you when you return to our website and helping our team to understand which sections of the website you find most interesting and useful.

Strictly Necessary Cookie should be enabled at all times so that we can save your preferences for cookie settings.

If you disable this cookie, we will not be able to save your preferences. This means that every time you visit this website you will need to enable or disable cookies again.

This website uses Google Analytics to collect anonymous information such as the number of visitors to the site, and the most popular pages.

Please enable Strictly Necessary Cookies first so that we can save your preferences!